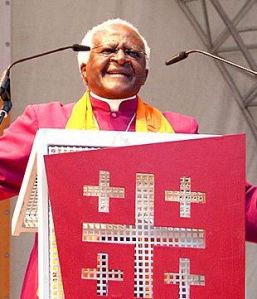 In the 1930’s this was the rallying cry of Germany’s up and coming Nazi party. Today it is the cry of Archbishop Desmond Tutu.

At 79 years old, Nobel Peace Prize laureate and Presidential Medal of Freedom recipient Desmond Tutu, known for his work to end racial segregation in Africa, hasn’t slowed down his fight against Israel. He’s leading the attack with that age-old battle cry, “Don’t buy from Jews!”

His recent activities include:

Understand that Tutu is not calling for a boycott of only those Israeli companies and institutions that support the occupation of Palestine. His goal is to cripple the entire state of Israel (about the size of New Jersey), including Arab Israelis.

The reason Tutu gives for his long-term stand against Israel is his accusation that Israel practices racial segregation. The man possesses resources and experience enough to know that Arabs live and work alongside of Jews within Israel, enjoy full Israeli citizenship, use the same facilities, receive the same benefits, and hold elected political offices. So why would he so emphatically charge the opposite?

Perhaps the accusations have something to do with Tutu’s charge that Israel behaves in an “un-Christian” manner.

Tutu is scheduled to appear at the anti-Israeli Russell Tribunal in November 2011, to discuss the charges of racial segregation within Israel.

Archbishop Tutu Wages War on Israel and the Jews

Why Single Out Israel?

← Family Rescued from Anti-Christian Violence
Where do you worship? Is God OK with that? →